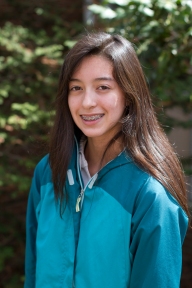 Examining solutions to address the root causes of immigration, Madrid suggested that U.S. government officials “reorient the focus of their foreign assistance programs on helping poor Central American countries more than they have done in the past.” She concluded her essay by encouraging Christians to “love your neighbor and make them feel welcomed.”

In addition to the grand prize, national honorable mention prizes of $500 each were awarded to Abby Hochstetler and Simon Graber Miller, both students at Bethany Christian Schools in Goshen, Indiana, and Duncan Wanless of North Fresno (Mennonite Brethren) Church in Fresno, California. Wanless and Miller’s essays focused on reducing gun violence in the U.S. while Hochstetler wrote about the impact the “war on drugs” has on Colombian farmers.

The annual essay contest highlights the perspectives of youth on significant public policy issues and promotes the involvement of young people in faithful witness to government authorities.

The contest is open to Anabaptist youth of high school age and to all youth who attend Mennonite high schools. Entries are judged on the participants’ understanding of the issues, clarity of argument and degree of creativity in crafting thoughtful policy positions.